We were delighted to sponsor the Centre for Army Leadership annual conference, hosted at the Royal Military Academy Sandhurst and attracting 900 people from military, civil service, sports, third sector and business.

The speakers brought an inspiring and at times provocative presentation to us about leading change. Nik Gowing, co-author of Thinking the Unthinkable set the tone at the outset, describing how the volume and pace of change presents a significant challenge for all leaders.

Margaret Heffernan, entrepreneur and author of Willful Blindness highlighted how, by nature, humans tend to be blind to critical risks that need to change. This was a theme developed further by David Marquet, former nuclear submarine captain and author of Turn The Ship Around.  Finally, John Manzoni, Chief Executive of the British civil service inspired with his reflections on leading change in the public sector, having previously been part of the leadership team at BP.

These are our top five insights from the conference.

The pace of change is now such that leaders need to frequently grapple with issues that would otherwise be deemed unthinkable. Indeed, unthinkable events in the past few years have revealed a new leadership fragility at the highest levels.

The statement "that will never happen" is of itself an indication to explore "that" issue and prepare for that very thing to happen. This applies to all areas, whether external factors like political appointments and decisions, climate and macroeconomic shifts or internal factors - key people, supplier risk and customer habits. This is challenging as it requires energy and a constant state of questioning approaches, problems and opportunities.

Crucially, the past actions and decisions that created current success won’t work in the future. Leaders are required to constantly challenge their assumptions and assumed orthodoxies. Nik Gowing used a powerful analogy to describe this. He said: 'It’s no longer about identifying the elephant in the room; the volume of change feels like trying to swallow it in one mouthful.'

We see this in our work with leadership teams. Those that actively seek new and unusual perspectives are those that are best able to take advantage of the "new normal". Allocating the “what if” role to someone in a team can open the team’s minds to potential problems that would otherwise lay untouched. Human data analytics can quickly identify those people that possess agile and curious approaches to problems as well as those that adopt a defeatist, resigned or even closed approach to new issues.

Margaret Heffernan drew attention to our learned behaviour of ‘wilful blindness’. Rather than confronting dysfunctional relationships, abusive behaviours and poor performance, we can too easily turn a blind eye and fail to challenge. Clues and signals that point towards problems are too often routinely excused and ignored until there is a dramatic and serious problem.

Diversity in a leadership team can help to mitigate this problem. To do so, diversity needs to be genuine. As Margaret Heffernan said: 'It’s possible to look diverse but lack the intellectual capacity to be diverse.' Productive diversity is a running theme in our work with our clients as recently described in a recent blog.

With willful blindness in mind, we need to be far more careful about encouraging a "hero CEO" culture, where success and decision making is associated with an individual. It is impossible for any one person to consider all perspectives and issues; diverse teams that embrace healthy conflict are those that will lead their organisations to success.

Teams that relate well together - those with the psychological safety to support and challenge each other, give constructive criticism and receive feedback openly - will succeed. Organisations that invest properly in creating a culture of respect and civility outperform those that permit toxic behaviours. Success is less about the individual talent in a particular team and more about how that team interacts together.

We wholeheartedly agree with Margaret Heffernan’s view. Healthy organisations that grow and flourish are those that invest and attend to the relational capital within the company. We work with organisations to establish behaviours and attitudes that are understood as respectful or civil and ensure that these are embedded in their culture. Whilst there are common themes, every business is unique, with varying expressions of what constitutes civility.

How can we all demonstrate greater respect for others at work?

John Manzoni described how he is leading significant change in the UK civil service, overcoming big-system thinking and entrenched silo-issues. He has introduced matrix management and cross-department working to ensure that the service is focussed on delivery. We were particularly struck by his passion for the many talented people that work within the civil service, the thousands who consistently bring their skills and energy to the organisation. It was clear that for him, his primary role as chief executive is not only to harness this talent but continually develop other people.

Investing resources into current and future leaders is essential for any organisation, from the smallest start-up business to the largest employer - the civil service. Yet with increasing pace of change and competing demands, developing others can easily fall down the list of priorities, with shorter-term issues taking precedent.

We echo Jon Manzoni’s call to ensure that committing to developing the talent within your business remains high on the agenda. Without this commitment, future failure becomes highly likely.

In a military setting, it might be expected that ‘command and control’ would be the assumed leadership style. David Marquet delivered a brilliant talk helping us to understand that leaders can only truly control themselves rather than everyone else on their team.

Creating a culture of intention - whereby people are genuinely autonomous for achieving their objectives - creates the conditions to achieve excellence.   David gave us two powerful illustrations from his time as captain of a nuclear submarine. The first, having been propelled at short notice to captain the Santa Fe, he gave an order to switch to “speed two” when in fact the new ship had just one setting. The order was passed on by his subordinate, despite the fact that it was known by him to be a pointless order.  No-one spoke up as the culture at the time was highly deferential to the hierarchy. Creating conditions that allow people not only to speak up but to provide their more optimal ideas for achieving the mission is how effective teams function.

The second was a photo from the top of a surfaced submarine, receiving a Navy SEAL team via helicopter. The image showed the view of the operation that David, as captain, had; he could only see the top of the helicopter and not the action below. His point was that leaders need to set their people up to succeed and trust them to execute well as no captain or CEO can see everything.

Great leadership creates the conditions where people are both responsible and autonomous, so that 'I was just following orders' is not a valid reason for poor results.

Do any of these insights resonate with you? How can we apply this learning to our leadership?

We'd be delighted to hear from you!

About The Author | The Leaders Team 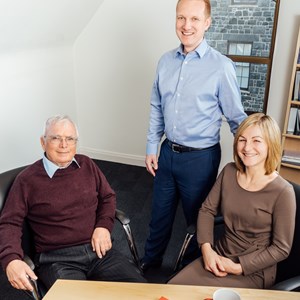 Phil Eyre is Founder of Leaders, working with Peter Woodward and Kaaren Welsby. The team consults with clients across a wide spectrum of industry, public service and third sector to enhance leadership skill and organisational health.