What Matters Most; Today's Results or Tomorrow's Impact?

A subject that is never far from our minds is future thinking, and we frequently ask the businesses we work with, “What matters most - today’s results or tomorrow’s impact?”

Our approach was deepened by our trip to the Royal Military Academy at Sandhurst last year. History surrounds you there - the stories and moments in time that have shaped future thinking and actually changed the course of history.

“A Good Leader Knows When to Sack Themself”

The average tenure of a CEO is five years. So how do CEOs measure their success after their average five-year tenure? Is it the delivery of results? An increase in the share price? Is it that everything you deliver is now is your doing, rather than your predecessor’s? Maybe it’s having your future leaders in place? Or perhaps the success impact won’t be felt for another 10 years or more.

We often ask leaders, “Do you have an exit strategy in place?” That is much easier later in one’s career and often, once you are older, it becomes obvious that you need to know how to exit. If you are an ambitious 40 to 45 year old, however, it's understandably more challenging.

Succession planning can be compared to the role parents play in sharing their values when bringing up their children. CEOs need to share healthy values to shape their successors. Part of that thinking is around the kind of people that are we shaping as leaders - long-term, strategic thinkers.

It is in horizon thinking that personal leadership values are often tested. The lure of short-term transactional results - regardless of longer-term impact - can be seductive: doing the easy thing rather than the right thing and seeking personal accolades.  A healthy humility is often associated with longer horizon thinking, including contentment that the future organisation will reap the rewards from decisions made today.

Horizon Thinking in a Period of Turbulence

Many years back, Leaders associate Peter Woodward was the newly appointed Labour Relations Manager for a very large semiconductor manufacturer in the UK.

A downturn in demand should have been foreseen and planned for but, in the event, senior management was asleep on the job. Both the HR and Manufacturing Directors were shown the door and an immediate and very significant staff reduction was required, some 450 out of the total workforce of 3,000.

Without prior planning, the risk of losing valuable future skills was a clear and present danger. Peter was leading the HR team managing the redundancy and this “future proofing” was beyond the team’s immediate capacity, given issues with the computation of severance packages, devastatingly low morale on the factory floor and dealing with a local community in shock.

A senior manager from America made a rapid decision to connect Peter to a very experienced production manager who could undertake the future horizon planning in short order. His role was to provide input to the HR team so that they could make rapid decisions against clear and objective criteria as to who should stay and who they would have to let go. He liaised extremely effectively with demoralised managers and quickly gained their commitment to this task.

What was remarkable in this individual was that, although he already knew his permanent role was redundant, and in truth he owed very little in commitment to his current employer, he acted above and beyond their expectations.

Over a short period of three to four weeks, he dedicated long days and evenings to create an incredibly sophisticated people/skills database that anticipated future needs, on at least a five-year horizon. It is no exaggeration that he helped the firm to secure a more stable work environment and was valuable in persuading the US board that several of the company’s production lines had a long-term future in the UK, which had been in doubt.

Now, many years after this turbulent period, Peter still recalls this manager as a role model in “followership”; despite his own very uncertain future, he demonstrated values of commitment and subordination of his role to a team commitment.

So what was his legacy? In our opinion, he probably extended the future and security of several hundred jobs by establishing standards of excellence and skill development. He teaches us that even in the most difficult times, we must still try to define and stay true to our future horizons.

Vision Without Action is a Daydream. Action Without Vision is a Nightmare

As leaders, we have to frequently shift our thinking between the big vision picture and the immediate task at hand. The leadership role is to hold the longer-term vision closely, ensuring that all activity is orientated towards achieving those long-term objectives. This can be like “funnel thinking”, moving between the broad thinking, visionary top and the narrow, task-orientated spout.

Whilst some leaders possess the agility to move fluidly between these two mindsets, most are orientated to one approach. The most effective leadership teams usually bring a blend together, with the trust and understanding to recognise which team members need to be heard the most at any particular time.

In our work, we observe some of these skills, both productive and counterproductive, in data. For example, a senior leader can appear driven, ambitious, hardworking and results focused - desirable qualities for most leaders. However, our data will also show whether they are self-centred or even narcissistic in nature. This type of person will often excel in the short term but eventually be the cause of talented people and clients leaving the business. Their idea of long-term legacy is all about their name and status rather than the people in the business or those served by the business.

Where is the Finish Line and is it Really the End Point?

Kaaren Welsby’s experience with the British Army mirrors our belief that the idea of “recovery”, or how we complete or end a task, is important. In fact, Kaaren says it's critical - what happens at the end is as important as what happens at the beginning and during the task: “We may experience the sense of completion 'at the end', but conversely this may make us vulnerable and may mean that mistakes are more likely to be made at this point.”

But, where is our finish line and what is our measure of completion?

It is important to always “think to the finish”; in the Army code of leadership: "Leaders must (always) consider the future, and ensure that decisions are made for the enduring good of the organisation.”

Short-term gains are seductive - we all like short-term wins, things that make a return now are often essential to our organisation’s financial health. If we can create short- term wins that can also serve a longer purpose that is truly fantastic!

We frequently meet leaders who are only focused on short-term numbers, and they inevitably lose their leadership edge and behave in counterproductive ways.

What does horizon thinking mean to you? What can do you do to think beyond today?

Speakers include Major General Paul Nanson who is the Commandant of the Royal Military Academy at Sandhurst; Lord Bilimoria of Chelsea CBE, DL, Chairman and Founder of Cobra Beer, Independent Crossbench Peer in the House of Lords; and Dr Ellen Moon, Lecturer in Environmental Engineering.

Find out more and book: https://www.leadersconsultancy.co.uk/conference/ 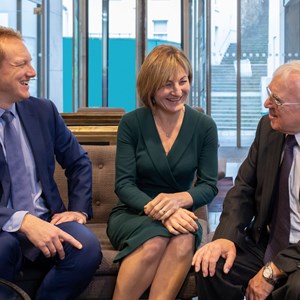 Phil is Leaders’ founder. He has an enthusiastic and inspiring style, drawing on his experience in business, academia and social sectors to help any leadership team to achieve phenomenal performance. Phil has sophisticated expertise in psychometrics and in the application of human data for individual, team and organisational success. He has trained with, and been mentored by, global leaders in this field, notably Dr Chuck Coker in the US. Peter Woodward worked for 27 years in the “high technology” industry, first with Texas Instruments and then Intel Corporation. After spending nine years in a wide range of manufacturing and production planning roles he moved into human resources. Peter’s roles at Intel included European Human Resource Director, and Europe, Middle East & Africa (EMEA) Training Director. Dr Kaaren Welsby possesses a first class BA (Honours) degree in English Literature, an MA (Honours) degree in the written word and the visual imagination and a PhD in English Literature and Art History. Kaaren is a Major in the British Army Reserves; she has undertaken two operational tours and is a trained media officer. She has worked extensively in the field of army recruitment, education and programme delivery, before becoming an education adviser for the Army Officer Selection Board, part of the Royal Military Academy Sandhurst group.